It also contains what I assume is a photograph of Pres. William Howard Taft sporting a coat with a fur collar. What do you think?

But that’s not all. There’s another notable person in these pages, King George V.

We have closed down the reading room for a few weeks while we handle collection management. I’ve been going through our onsite collections to get a sense if there are any issues that we might need to address.

Undoubtedly, going through the collections led me to some interesting items. My curiosity was piqued by the James S. Waters World War I scrapbook. What did he decide to save from his military service, his vaccination card.

Also, someone took a picture of this little creature. I can’t completely make out the description other than “cat caught at.” If you can tell what kind of “cat” that is, please let us know.

Next week, we’ll look at a famous person? in the scrapbook. If you’re excited to look at it now, it has been digitized.

Head on over to the page on our blog labeled “Online Exhibits and Story Maps” to find a host of refreshed online exhibits and some new ones, too.

Many of our online exhibits previously lived at the same URL exhibits.library.rice.edu. We have wanted to move each of the exhibits to a unique URL, but were unable to find the time for it in addition to our other duties. In our remote working environment, nit-picky work like creating unique banners, checking URLs, and updating out of date information became much easier to do.

You’ll find information on Dick Dowling, the Abbie Hoffman Incident, and U.S. Civil War Narratives, along with other exhibits that focus on Rice history, local history, and rare books.

Any new online exhibits and story maps will be added to that page. Have fun!

A new exhibit is now on display in the main hallway of Fondren Library celebrating the 100th anniversary of World War I. “100: The Great War Seen through the Eyes of two Soldiers” was first shown in France as part of the commemoration of the centennial of the Great War. It is curated by the French non-profit “Cercle de Valmont” in collaboration with the Woodson Research Center to honor the memory of the American soldiers who went to combat with the allies on French soil.

The exhibit shares two soldiers’ stories taken from two unpublished sources. One is a scrapbook album from the Woodson which retraces the World War I experience of Galveston native and Rice graduate James S. Waters, Jr. The other is a private archive of 450 photographs taken in the trenches by a young French soldier, Paul Gueneau.

The photographs Gueneau took in the trenches are a powerful testimony to the realities of the frontline displayed alongside narrative panels documenting Waters’ movements from Rice Institute graduate,  training as a “90-day wonder” officer, and experience overseas in France.

Gueneau and Waters were the same age, born in 1895 and 1894 respectively. When Waters became an Engineering freshman at Rice Institute, in 1913, Gueneau had abandoned his dream of becoming an engineer, dropping out of school and working as a bank clerk at 14 to provide for his family after the premature death of his father. In December 1914, Gueneau, 19, was enlisted in the French 56th Infantry Regiment and spent the next 4 years at the frontline, until he was put out of combat by mustard gas injuries on September 4th, 1918. Just days later, Waters was at the frontline for the first time, fighting in the St-Mihiel offensive. Gueneau and Waters never crossed paths, but today their combined testimonies give us an invaluable glimpse into the past.

The exhibit will be on display until end of March 2019.

We hope everyone had a nice break. We’re back and ready for researchers, if you’re able to drag yourself in. If you’d rather stay at home, we’ve got you covered.

It tells the story of Paul B. Hendrickson and includes an interactive map about his time here in Houston and in Europe. We hope you enjoy it.

“Will be glad to see home some time and have a good long talk. Your loving son, Paul”

Sunday, November 11 marks 100 years since the end of the First World War. Armistice Day commemorates the armistice signed between the Allies of World War I and Germany, ending hostilities on the Western Front of WWI. The cessation took effect at eleven o’clock in the morning – the eleventh hour of the eleventh day of the eleventh month of 1918. A formal peace agreement was reached at the Treaty of Versailles in 1919.

We recently digitized one of our World War I collections and it is now available in our digital archive. The Paul B. Hendrickson World War I collection contains correspondence written by Hendrickson to his family back home during his time in service. There is a diary kept during the year he was in France and almost 300 postcards which were sent home.  Hendrickson was stationed in France near Saint Mihiel sector on Armistice Day and wrote to his parents: “This is a big day here. Every one is celebrating. We played quite a while, and some of our boys grabbed a couple Frenchmen and began dancing.”

“This is a big day here. Every one is celebrating. We played quite a while, and some of our boys grabbed a couple Frenchmen and began dancing.”

Hendrickson enlisted on April 12, 1917 in Danville, Illinois in the Band, Headquarters Co, 5th Illinois Infantry National Guard, serving in the first enlistment. The regiment initially trained at Camp Parker in Quincy, Illinois. While there, he studied bugling and map drawing. On September 14, 1917, he traveled to Camp Logan, a newly created training camp in Houston, Texas. Hendrickson arrived at Camp Logan on September 17, 1917.  While at Camp Logan, he trained in trench warfare, open formation maneuvers, and rifle range practice. He arrived in France on May 24, 1918. He served in the Amiens sector, July 21-August 18; Verdun sector, September 9 – October 17; and St. Mihiel sector, November 7-11, 1918. He returned to the U.S. on May 22, 1919. View the finding aid online.

The above permission slip highlights an unusual time in Rice’s early history wherein all of the incoming men became army recruits.

This letter from Allen Wade Mount describes what happened a bit more.

Here is the information from the 1919 Campanile.

What, at least to me is the most interesting piece of the permission slip, is that all the men had to listen to “Taps” every night before going to bed. If you are thinking that the students enjoyed this lights out routine, you are mistaken.

On February 9, 1918, the students met with the Trustees after submitting a list of proposed rule changes. “Taps” is clearly mentioned.

Yet the permission slip at the top is dated October 1918 and Eddie Dyer did not matriculate until 1918. Thus, “Taps” must have still been a part of the nightly ritual. There is one clue that this might have only applied to the incoming class. This news clipping is from February 20, 1919.

Also, in case you want to see a young Eddie Dyer.

2017 was an incredibly busy year for the Woodson. It included completing an inventory of all of our rare books, creating new online and physical exhibits, growing our fine arts and Jewish history collections, exhibiting the history of Camp Logan, placing the KTRU Rice Radio archive online, co-hosting the Houston Folk Music Archive Celebration with the Friends of Fondren Library, participating in the Oh Project collection, and helping our Fondren Fellow discover and map the hidden bits of information in our Civil War diaries.

As we complete some of the projects above and add new ones, we’ll update you on the results. Here’s to a great 2018.

2017 marks the centennial of the U.S. involvement in World War I (1914-1919).  An exhibit in the cases near the east entrance of Fondren Library created in collaboration  with Rice’s Anthropology department offers a brief account of the history of Camp Logan, a World War I training camp once situated in what is today Memorial Park in northwest Houston.  This exhibit marks the 100 year anniversary of the opening of Camp Logan in 1917. 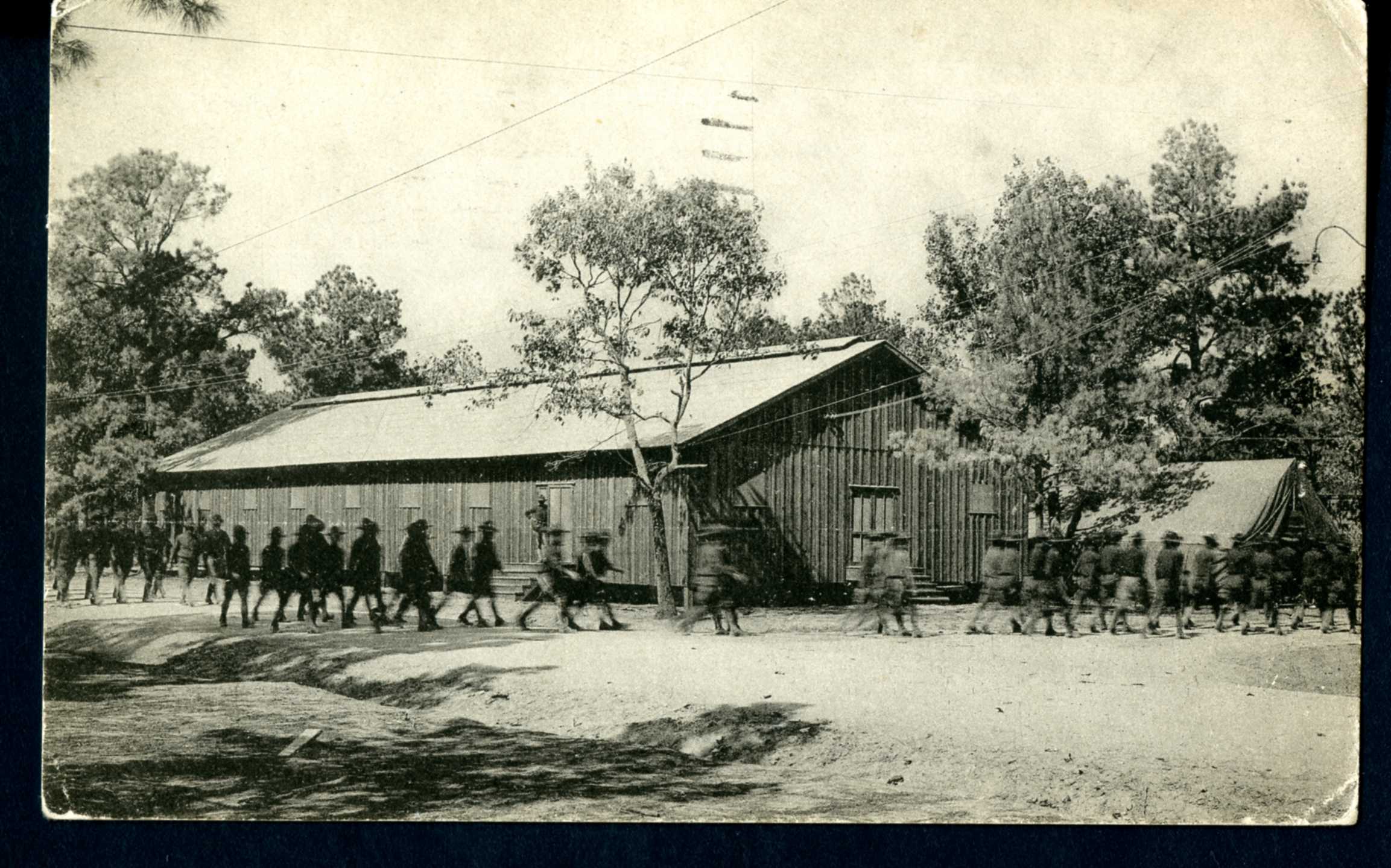 Although this centennial has served as an inspiration for the exhibit, Rice University faculty, staff, and students have been involved in researching and preserving Camp Logan’s history for some time:  for example, the Woodson’s collections of papers and objects related to Camp Logan (the Clark Bruster Collection) and the recently acquired Paul B. Hendrickson collection. Dr. Jeffrey Fleisher and students from the Anthropology Department have been investigating Camp Logan archaeologically since 2015.  These collections and the results of this research form an important part of this exhibit.  Also on display are postcards, ephemera, and images graciously loaned by Robbie Morin from his extensive collection and items from The Heritage Society. These materials have greatly enhanced the exhibit.

Occupied for a short period of time from 1917-1919, the story of Camp Logan represents the complexities and tragedies of early 20th-century Houston.  Camp Logan emerged quickly at the edge of this small but growing city, and provided a significant economic boost to it as more than 30,000 troops were trained there.  But Camp Logan is also tied in historical memory with the Houston Riot and the racial segregation that structured the US military at this time.

One of the most well-known and tragic of these aspects is the Houston Riot of 1917. The all black 24th Infantry was sent to guard the still under-construction site of Camp Logan in early 1917. On August 23rd two Houston police officers assaulted and arrested two members of the 24th Infantry for inquiring why a half-dressed, black mother of five was being assaulted outside her own home in downtown Houston. In retaliation to this unfair treatment, and spurned on by the general racist attitude of the city as a whole, around 100 men of the 24th Infantry took matters into their own hands, gathered weapons from their stockpile and marched towards the police station with the intent of freeing their fellow soldiers. The two-hour riot that followed was a tragic and difficult episode in Houston’s history, the consequences of which meant the death of black and white Americans and the incarceration of black troops.

A current exhibit at the Buffalo Soldiers National Museum covers the events of this riot in more detail and the museum is commemorating the 100th anniversary of the Houston Riot with week-long events later this month. More information is available on their website: http://www.buffalosoldiermuseum.com/?event=100th-anniversary-of-camp-logan-mutiny-1917-2017&event_date=2017-08-21

The Camp Logan exhibit in Fondren Library will be on display through the end of December 2017.

Below is a letter from Otta to his father detailing the month’s expenses, along with a daily list.

In his letter, Otta mentions the possibility of entering military service, but admits that he is unsure if he wants to join. Sadly, less than a year after enlisting, he died of pneumonia/influenza in Massachusetts.